Excerpt from The Company Files 2: The Naming Game

Posted on January 9, 2019 by gabrielswharf

At seven minutes past the hour while reviewing the classified documents at his desk, one of the two colored phones, the beige one, rang. He placed the receiver next to his ear, closed the folder, and waited for the caller’s voice to speak first.

“Is this Jack Marshall?” 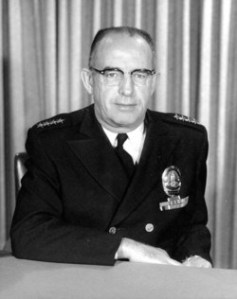 “This is William Parker. Is the line secure?”

“It is,” Jack replied, his hand opening a desk cabinet and flipping the ON switch to start recording the conversation.

“I know of you, Chief Parker.”

“Were you expecting my call?”

“No and it doesn’t matter.” Jack lied.

“Fact of the matter, Mr. Marshall, is an individual, whom I need not name, has suggested I contact you about a sensitive matter. He said matter of security so I listened.”

“I was instructed to give you an address and have my man at the scene allow you to do whatever it is that you need to do when you arrive there.”

“Pencil and paper are ready. The address, please.” 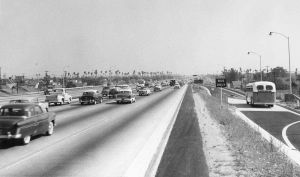 Jack wrote out the address; it was in town, low rent section with the usual rooming houses, cheap bars, about a fifteen-minute drive on Highway 1 without traffic.

“Ask for Detective Brown. You won’t miss him. Don’t like it that someone steps in and tells me how to mind my own city, but I have no choice in the matter.”

Jack ignored the man’s defensive tone. He knew Detective Brown was a dummy name, like Jones or Smith on a hotel ledger. Plain, unimaginative, but it would do. Most policemen, he conceded, were neither bright nor fully screwed into the socket. A chief was no different except he had more current in him. The chief of police who ruled Los Angeles by day with his cop-syndicate the way Mickey Cohen owned the night must’ve swallowed his pride when he dropped that nickel to make this call.

Jack hung up and flipped the switch to OFF.

Whatever it was at the scene waiting for Jack was sufficient cause to pull back a man like Bill Parker and his boys for twelve hours. Whoever gave this order had enough juice to rein in the LAPD.

Jack took the folder he was reviewing and walked it across the room. He opened the folder once more and reread the phrases ‘malicious international spy’ and, in Ronald Reagan’s own choice of words, ‘Asia’s Mata Hari’, before closing the cover and placing it inside the safe. His review will have to wait. He put on his holster and grabbed a jacket.

Betty came out on the porch as he was putting the key into the car door.

“I won’t be long. Please kiss the children good night for me.”

“Can’t this wait, Jack? The children were expecting you to read to them tonight. Jack Junior set aside the book and you know Elizabeth will be crushed.”

“You need to look them in the face when you tell them sorry.”

He opened the door as his decision. She understood she dealt him the low card. “Want something for the road?”

He closed the door with finesse. He couldn’t help it if the children heard the car. He checked the mirror and saw her on the porch, still standing there, still disappointed and patient, as he drove off.

Detective Brown, sole man on the scene, walked him over to the body without introducing himself. Jack didn’t give his name.

At six-fifteen the vet renting a room down the hall discovered the body. Detective Brown said the veteran was probably a hired hound doing a bag job—break-ins, surveillance, and the like. Recent veterans made the best candidates for that kind of work for Hoover, Jack thought. Worked cheap and they went the extra mile without Hoover’s agents having to worry about technicalities like a citizen’s rights going to law.

“What makes you think he was hired out?” Jack asked.

Brown, a man of few words, handed Jack his notebook, flipped over to the open page he marked Witness Statement and said politely, “Please read it. Words and writing are from the witness himself.”

“No, sir. The coroner places the death around early afternoon, about 2ish. Our patriot was across the street drinking his lunch. I verified it.”

Jack viewed the body. The man was fully dressed wearing a light weave gabardine suit costing at least twenty-five. The hardly scuffed oxfords had to cost as much as the suit, and the shirt and tie, both silk, put the entire ensemble near a hundred. Hardly class consciousness for an alleged Communist, Jack thought.

The corpse lying on his side reminded Jack of the children sleeping, minus the red pool seeping into the rug under the right ear. The dead man wore a small sapphire ring on his small finger, left hand. No wedding band. Nice watch on the wrist, face turned in. An odd way to read time. Breast pocket contained a cigarette case with expensive cigarettes, Egyptian. Jack recognized the brand from his work in the Far East. Ten cents a cigarette is nice discretionary income. Wallet in other breast pocket held fifty dollars, various denominations. Ruled out robbery or staging it. Identification card said Charles Loew, Warner Brothers. Another card: Screen Writers Guild, signed by Mary McCall, Jr. President. Back of card presented a pencil scrawl.

“Find a lighter or book of matches?”

Detective Brown shook his head. Jack patted the breast pockets again and the man’s jacket’s side-pockets. Some loose change, but nothing else. The man was unarmed, except for a nice pen. Much as he disliked the idea Jack put his hands into the man’s front pockets. Nothing. He found a book of matches in the left rear pocket, black with gold telltale lettering, Trocadero on Sunset. Jack flipped the matchbook open and as he suspected, found a telephone number written in silver ink; different ink than the man’s own pen. Other back pocket contained a handkerchief square Jack found interesting, as did Detective Brown.

“What’s that?” he asked, head peering over for a better look.

“Not sure,” answered Jack, unfolding the several-times folded piece of paper hidden inside the hanky. The unfolded paper revealed a bunch of typewritten names that had bled out onto other parts of the paper. It must have been folded while the ink was still wet. It didn’t help someone spilled something on the paper. Smelled faintly of recent whiskey. Jack reviewed what he thought were names when he realized the letters were nonsense words.

“Might be a Commie membership list. Looks like code.”  But Brown zipped it when Jack folded the paper back up and put it into his pocket.

“The paper and the matches stay with me. We clear?”

“Uh, yes sir. The Chief told me himself to do whatever you said and not ask questions.”

“Good. Other than the coroner—who else was here? Photographers, fingerprints?”

“Nobody else. Medical pronounced him dead, but nothing more. Chief had them called off to another scene— a multiple homicide, few blocks away. We’re short-staffed tonight. The Chief said he’d send Homicide after you leave. They’ll process the scene however you leave it. They won’t know about the matches or the paper. Chief’s orders.”

Jack checked his watch. Man down, found at six fifteen. Chief called a little after seven. He arrived not much later than seven forty. The busy bodies would get the stiff by eight or eight thirty, the latest. Perfectly reasonable Jack thought. He squatted down to see the man’s watch, noticing light bruising on the wrist and the throw rug bunched into a small hill near the man’s time hand. Intriguing.

“Thank you, Detective. I’ll be going now. If I speak to the chief I’ll let him know you’ve done your job to the letter.”

Jack knew he and the chief would be speaking again.

Outside on the street, Jack pulled out his handkerchief and wiped both hands for any traces of dead man as he headed for the parked car. Compulsive habit. He pulled up the collar on his jacket. It was cold for late May. 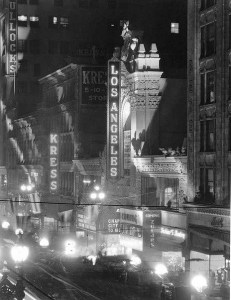 The street sign said he was not far from Broadway. In this part of town thousands lived crowded in on themselves as lodgers in dilapidated Gothic mansions or residence hotels, working the downtown stores, factories, and offices, riding public transit and the other funicular railway in the area, Court Flight, a two-track railway climb towards Hill Street.

Los Angeles changed with the world. The war was over and there was a new war, possibly domestic, definitely foreign. Court Flight is gone, ceased operations. Its owner and his faithful cat had passed on. His good widow tried. In ’43 a careless brush fire destroyed the tracks and the Board of Public Utilities signed the death warrant; and now Jack was hearing whispers Mayor Bowron planned to revitalize the area International Style, which meant dotting the desert city with skyscrapers.

Jack opened the door and sat behind the wheel a moment. He took the family once to nearby Angels Flight. Junior wondered why there was no apostrophe on the sign. Betty tolerated the excursion, indifferent to Los Angeles because she preferred their home in DC. He released the clutch. Betty disliked LA because it changed too much without reason. She might have had a point. He shifted gear. Pueblo city would level whole blocks of thriving masses just to create a parking lot. He pulled the car from the curb.

gabriel’s wharf is a blog on the random thoughts and writings of author Gabriel Valjan. His stories continue to appear online and in print journals. Winter Goose Publishing publishes his Roma Series.
View all posts by gabrielswharf →
This entry was posted in Mystery, Noir and tagged Gabriel Valjan, The Company Files, The Naming Game, Winter Goose Publishing. Bookmark the permalink.

1 Response to Excerpt from The Company Files 2: The Naming Game